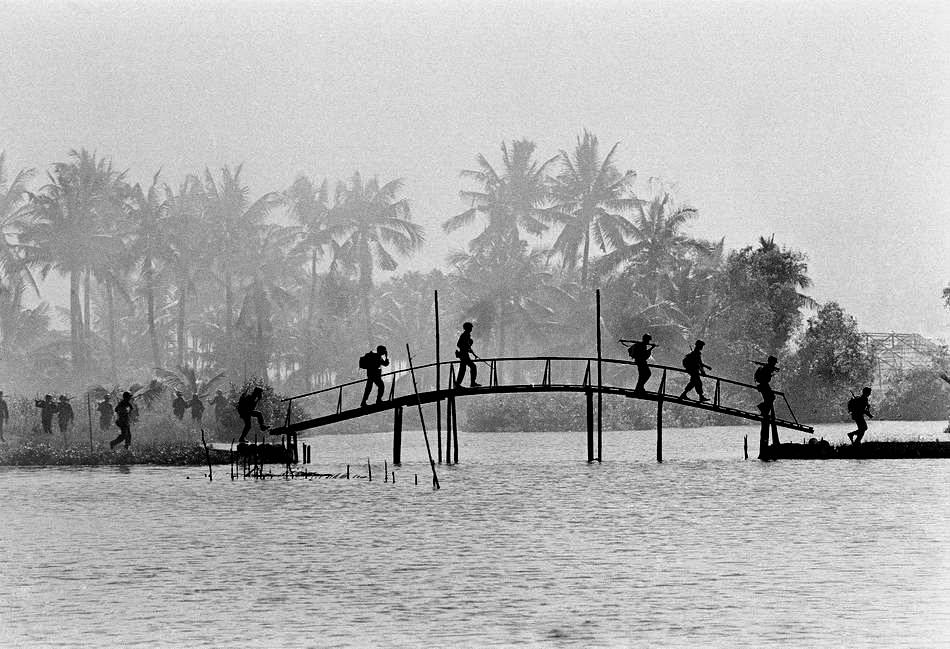 Green tracers shredded the darkness as the NVA emptied their magazines into the panicking Ranger team. As the soldiers scrambled to find their rifles, red tracers shot through the night in return fire. The firefight was short and fierce, lasting only three minutes, with the NVA and the Americans so close to each other that they didn’t dare use hand grenades for fear of getting hit by their own shrapnel. A dozen rifles roared on full automatic, spewing hundreds of rounds into the air as the two patrols exchanged fire.

“Get Holeman!” Eaton hollered. As they dragged Ron away from the point of contact, the firing abruptly ended. The NVA had turned, and were now running for the nearby village. They knew that the choppers would be raking the area with mini-guns in exactly ten minutes–just long enough for them to make it to safety. Hit and run. They had it down to a science. Kelly and Keeling picked up Ron, jostling his limp body between them as they broke through the maze of bushes, dropping gear as they went, not knowing if he was dead or alive.

They reached the landing zone just ahead of the chopper. The Huey suddenly appeared and Eaton popped off a trip flare. The instant the chopper set down in the grass, Keeling and Kelly swung Ron’s body aboard and pushed him inside, his loose joints uncooperative and making the task difficult. The team scrambled aboard the helicopter as the door gunners opened up with machine guns from each side of the slick. The ship slid sideways as it ascended, then banked immediately into a controlled, hard U-turn, flying at full throttle back to LZ English.

The pilots set down twelve minutes later in front of the three-quarter ton pickup with the red cross on the door. Everyone feared Ron was dead, but no-one said anything while they reverently lifted him into the truck and let the Medics take over. He hadn’t moved or responded to resuscitation on the flight back. As Hotel team stood silently on the chopper pad and watched the truck take off toward the med station, the Cobra gunships could be seen in the distance, strafing the area of contact in hopes of catching the enemy short of the village.

The speed at which a human soul can pass from life to death is stunning. The line of existence that separates the two planes is so thin, so tenuous, it can best be measured by a single heartbeat, a lone thought, a last breath. The person is here, and present–then nothing.

Some believe the dividing line is well-traveled by angels and demons alike, with orders in hand, waiting to receive and escort the transcending soul into eternity. For the soldier who has died, it is over. His earthly world is no more. The events and experiences that have led him to the last split-second of life, have come to a conclusion and the book of his physical life is complete. His spirit rises from his torn body, like smoke escaping from a cracked vessel. He arrives at the ethereal line, and is escorted into the mysterious unknown.

One-for-one. That’s the death rate. No one gets out this world alive. No one beats the odds. What happened to each person as they crossed the bridge and passed from life to death? Where are they?

Men instinctively know there is another place beyond the veil because God put the knowledge of eternity in their hearts. Ecclesiastes 3:11 says, Yet God has made everything beautiful for its own time. He has planted eternity in the human heart, but even so, people cannot see the whole scope of God’s work from beginning to end.

Five thousand years ago, a man named Job posed this question to his Creator: If a man dies, will he live again? All the days of my hard service I will wait for my renewal to come. You will call and I will answer you; you will long for the creature your hands have made. Surely then you will count my steps but not keep track of my sin. Job 14:15

Centuries later, Jesus, God in human form, vanquished death. He spoke with authority and without equivocation about the journey from this life to the afterlife. I am the living one. I died, but look—I am alive forever and ever! And I hold the keys of death and the grave. Revelation 1:18

I tell you the truth, those who listen to my message and believe in God who sent me have eternal life. They will never be condemned for their sins, but they have already passed from death into life. And I assure you that the time is coming, indeed it’s here now, when the dead will hear my voice—the voice of the Son of God. And those who listen will live. The Father has life in himself, and he has granted that same life-giving power to his Son. John 5:24-26

However, those the Father has given me will come to me, and I will never reject them. For I have come down from heaven to do the will of God who sent me, not to do my own will. And this is the will of God, that I should not lose even one of all those he has given me, but that I should raise them up at the last day. For it is my Father’s will that all who see his Son and believe in him should have eternal life. I will raise them up at the last day.  John 6:37-40